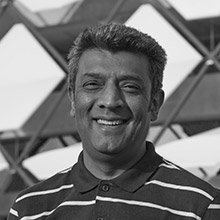 Dipesh is the Director of Pattern based at the principal London studio.

Dipesh Patel founded Pattern in 2009 as an experimental design-focused practice, using the latest software and technologies, dedicated to exceeding client expectations. Recognised as a globally renowned sports and leisure venue architect, Dipesh has 30 years’ experience designing and delivering projects for major events worldwide. Events include the FIFA World Cup, Olympics, Commonwealth Games, Pan American Games, Cricket World Cup and many others. Dipesh is both a qualified architect and urban designer.

Dipesh was previously a director of Arup Associates and has led many high profile projects including Kensington Oval, Barbados, Cricket World Cup, for which he won the prestigious BD Sports Architect of the Year for 2007/8. He is responsible for the design of the Coventry University School of Engineering and Computing. Dipesh was also the lead architect for the City of Manchester Stadium venue for the 2002 Commonwealth Games, and was awarded the 2002 GG2 Innovation Award for his work there. Most of his projects have a significant urban regeneration and civic emphasis.

Early in his career Dipesh had the privilege to work for Sir Denys Lasdun and Cambridge Design. Dipesh is also an experienced studio tutor. He has lectured, presented papers and written articles on Stadium design around the world. He was a panel member of the Humber Region Design Review Panel and Client Design Advisor to North Lincolnshire’s BSF programme. He studied architecture at the University of Bath, England, and Urban Design at the University of Pennsylvania, Philadelphia, USA.