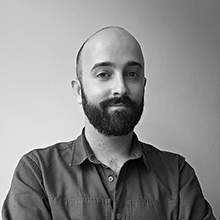 Nick is a practice leader in Computational design and research. He is currently the Design lead for Everton FC’s new 52,000 stadium in Liverpool, working across the Facade, Roof and Bowl.

Nick has used his considerable skills to advance the practice’s design methodology, his primary focus is on rule-based design, research and performance-orientated optimization, including research that would become the basis of an office patent and rebuilt the practice’s bowl generating software, which has been used on Pattern’s last six stadiums.

He has held major design roles across multiple international stadium projects, including various sporting tournaments, two World Cup stadiums, Pan American Games, Asian Cup and Olympics. These projects include Envelope and Bowl of Education City Stadium, façade and bowl of Al Rayyan Stadium and the roof and bowl of Regina Stadium. Additionally, Nick is a design lead on most office bids and competitions. In 2013, Nick designed the stadium for the winning bid for the Al Rayyan Stadium, to host the 2022 FIFA World Cup.

He has spent time on-site in the Middle East to deliver Hazza Bin Zayed Stadium and Education City Stadium.

His leading status in the field of parametric design is reflected in his appointment as a founding studio tutor at Abstract Machines studio, a Master’s of Architecture studio at Leeds Beckett University where he lectures on computation and digital fabrication. Over the last six years, Nick has led the design and construction of several full-scale public installations and pavilions, each tackling a unique fabrication system. His most recent project was shortlisted for the RIBA Award.